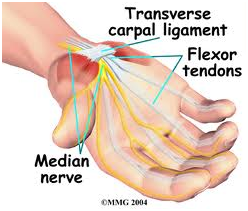 by Wendyanne Harrison – as seen in The Challenger Magazine

Problems with the wrist and hand are very inconvenient, but generally heal fairly quickly. Common injuries occur as the result of falls, where we instinctively put out our hands to save ourselves and result in broken bones.

Colles fracture
This is a break in the radius bone near the wrist usually due to a fall onto an outstretched hand. It often occurs in older women and if sustained by them, should also trigger consideration of bone density screening. It presents as severe pain usually located on the thumb side of the wrist that may radiate into the thumb, hand or forearm. In addition there will be swelling, bruising, tenderness on palpation, loss of use of the hand and sometimes a bony deformity can be seen.

Scaphoid Fracture. This break is more common in younger people who fall on the hand eg skateboarding. It is a break in one of the small wrist(carpal) bones. It presents as severe pain at the time of injury that may settle to an ache, usually located on the thumb side of the wrist. There may be swelling, tenderness on firmly touching the thumb web-space and markedly reduced wrist function. Interestingly this bone will not show as broken on Xray for about 10 days, so often the patient will be put in plaster by A&E and asked to return for a follow up Xray 2 weeks later, when the plaster will either be removed, or replaced on confirmation of the fracture.
All patients who have had 6 weeks in plaster will have stiff and weak wrists after it is removed and would benefit from physio to restore full movement and power of the hand and arm. Whilst in plaster it is very important that the rest of the limb remains mobile and is not allowed to get stiff, so the patient should be encouraged to move the arm fully above their head several times a day, as well and clenching the hand and stretching the elbow regularly.

Carpal tunnel syndrome (CTS) is a relatively common condition that causes pain, numbness and a tingling sensation in the hand and fingers.
Usually, these sensations develop gradually and start off being worse during the night, waking the patient with numb or tingling hands that improve by shaking them. It tends to affect the thumb, index finger, middle finger and half of the ring finger.
Carpal tunnel syndrome is caused by compression of the nerve that controls sensation and movement in the hands (median nerve) in the carpal tunnel – a narrow passage in the front of your wrist made up of small bones and a tough band of tissue. If symptoms affect both hands, then the cause of the compression may be centrally in the neck, not just locally in the wrists, and this should be checked out.
Causes include a family history of CTS, pregnancy – up to 50% of pregnant women develop CTS, injuries to the wrist, diabetes and rheumatoid arthritis. Symptoms can also be caused by strenuous, repetitive work with the hand, including poor typing/mouse position.

In some cases CTS will disappear without treatment, or simple self-care measures will reduce the symptoms. CTS in pregnant women often gets better within three months of the baby being born. However, in some women, symptoms can continue for more than a year and require treatment. Early CTS responds well to physiotherapy, and may include joint mobilisations, advice on use/positions of rest, stretches, massage and ultrasound. Avoiding sleeping with the hands curled inwards helps. Wrist splints can be useful. Sometimes corticosteroid injections can be used in the more resistant cases.
In more severe cases of CTS, surgery can be required to reduce the pressure on the median nerve. Surgery relieves the symptoms of CTS instantly, but it can take a while for the nerve to fully recover. Post-operative physio to give optimal recovery is advised.

Finger Tendon Ruptures
Complete tearing of one or more finger tendons typically follows a traumatic incident such as a direct impact to the finger during ball or contact sports. It presents as pain and swelling in the finger that may radiate into the hand, significant weakness of the affected finger and often deformity of the finger (e.g. a bent finger) that typically cannot be straightened by using the affected finger alone. Pain may also increase on firmly touching the affected tendon at the level of the finger. It occurs when the tendon snaps and it is very important that the finger is splinted straight at once and kept straight 100% of the time until seen by a doctor. This will avoid the finger remaining permanently bent and allow good recovery of the tendon.
Treatment is not usually required once the tendon has healed which usually takes about 6 weeks.

In England and Wales there are approximately 160,000 total hip and knee replacement procedures performed…

Posted in: Head to Toe Health